It was with no small sadness we left Colombia (and South America) behind. What a magnificent place! But next was Central America, with our first stop being the thin strip of land joining the big southern continent to its northern neighbour, aka Panama.

Our trip time was running out and we were faced with a difficult decision: should we spend some quality time in Panama at the expense of Costa Rica? Or should we just use Panama as a stopping point, and head straight on to Latin America’s adventure capital? Famous for its canal, its hats, and not much else, we didn’t know what to expect… Lucky for us, Panama City was a sport and helped make our minds up for us by being, well, pretty damn awful basically.

When you first arrive, you can’t help being impressed by the skyline.

With all the high rises right on the water, it reminded me very much of Miami, and that was not the last time we’d feel the North American influence. It was much stronger here in Panama, and Central America in general. And we didn’t like it.

South America felt like it’s own world, but suddenly in Panama you’re hit with skyscrapers, shopping malls, Walmart-style supermarkets, giant SUVs, drive-through fast food… even the local buses here were old American school buses. Admittedly they had been quite significantly modified by their more creative southern owners (and they only cost 25cents a ride!). 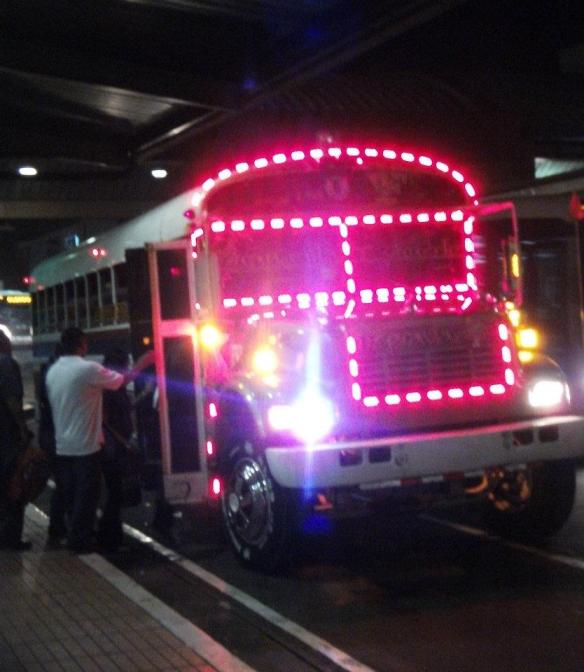 We soon figured we didn’t want to stay here any longer than was necessary. However the next bus out was the next evening so we decided we’d do the tourist trail as recommended by our hostel owner. This was the itinerary:

The Panama canal was possibly one of the most boring attractions I’ve ever visited. I’m aware of some of its historical and political significance, but this didn’t change the fact that you’re essentially just looking at an over-sized drainage ditch. We arrived 2 hours before the first ship was supposed to go through, but we decided against hanging around for this momentous occasion. Here’s a photo:

Isla Perico has some of the best views of Panama City in its best light (ie from a distance). We took our photos and hitched a ride to Casco Viejo with a dodgy tourist bus driver who charged $5 for the pleasure. He looked like he could be a local drug lord so we didn’t argue. Casco Viejo was like a smaller version of Cartagena’s old town, without the charm.

Now I don’t want to give the wrong impression: after travelling for over 4 months at this point, there was almost nowhere I didn’t enjoy. Unfortunately, Panama City falls into that very small category. The only redeeming things were the cheapness of the beer and a rather cool passport stamp. But after the highs of South America, it was somewhat of a letdown. So onto Costa Rica we went…….